Advertisement
Uncategorized In the Water at Miami

In the Water at Miami

Visit the Sea Isle Marina & Yachting Center at the Miami International Boat Show to check out new debuts in the water.

If you’re at the Miami International Boat Show, head over to the Sea Isle Marina & Yachting Center to see the latest from these four boatbuilders:

Check out the Back Cove 34 (below) and 37 from Maine boatbuilder Back Cove Yachts at slips 109 and 110. The Back Cove 34 debuted in July 2011, and the company notes that it is “motoryacht built in the Maine lobster tradition.”

Hinckley’s Talaria 48 (below) will make its first public debut at slip 227. According to a press release from the company, this 48-foot yacht features “state-of-the-art construction, classic styling above the waterline, and innovative design below, jet propulsion and patented JetStick control.” Also check out the Picnic Boat MK III next door.

The Marlow Voyager 76E LR, Explorer 78E and Explorer 57E will be on display at slip 168. The company notes that “the new Voyager series from Marlow, over four years in design and development breaks new ground for serious cruisers or weekend boaters.”

MJM Yachts, founded in 2002 by Bob Johnstone, will display the 36z and 40z (below) at slips 160-161. According to the company, the models are built “lighter, stronger and faster for better performance, handling and fuel efficiency without sacrificing cruising comforts or seakindliness.” 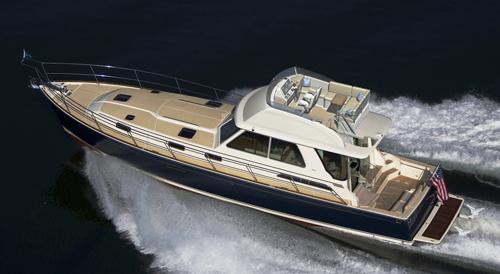 Looking for more? Visit the show’s website for a complete list of companies and boats on display.

Grand Banks 54 To Debut at Düsseldorf

Copyright © 2021 Yachting. A Bonnier Corporation Company. All rights reserved. Reproduction in whole or in part without permission is prohibited.