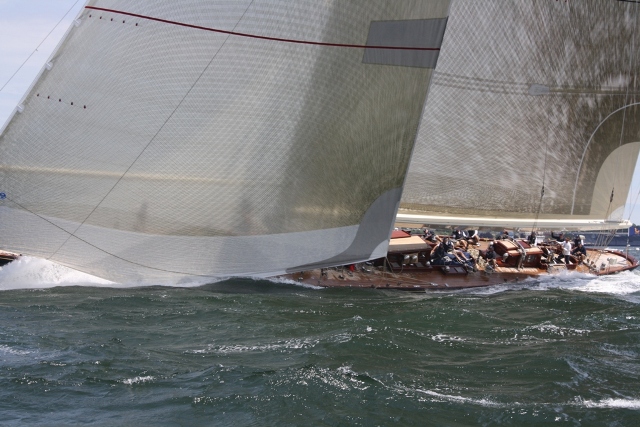 Good news and bad news on the J Class Regatta front. Bad news first: Hanuman and_ Endeavour_ have pulled out of the Falmouth event this June, and Hanuman has additionally withdrawn from the subsequent Solent race. Good news: The races will still be historic, featuring the most J Class superyachts sailing solely against one another in nearly 100 years.

Hanuman was withdrawn from both Falmouth and Solent soon after the St. Barths Bucket, which was held in March. At that event, Hanuman, along with Ranger, Velsheda (above), and Endeavour, raced against each other for the first time in a special Js exhibition. Hanuman finished fourth, unfortunately. Whether that is related to her withdrawal from the Falmouth Regatta is not clear. She did previously withdraw from the J Class Regatta held in Newport, Rhode Island last summer. As for Endeavour, her owner now has business commitments elsewhere in June. However, Endeavour will still race in the Solent in July.

The results mean that the Falmouth race will feature_ Lionheart, Rainbow, Ranger,_ and Velsheda. The same four sailing superyachts will compete in the Solent with Endeavour. Considering Lionheart and Rainbow have yet to race against other Js, each regatta promises to make history. In fact, Rainbow is currently completing sea trials, having been launched just prior to the end of 2011.

If you wish to attend the races, mark your calendars for the following dates. The Falmouth Regatta runs June 26 to 27 and then June 29 to 30 (June 28 is a spare day). The yachts will be out practicing in advance, on June 24 and 25. The Solent Regatta runs July 18 to 20, with practice days on July 16 and 17. Then, on July 21, all five Js are expected to re-enact the original Hundred Guineas Cup course, a.k.a. the America’s Cup course, around the Isle of Wight.