The expanded use of glass on the Absolute 58 Fly gives owners a new outlook.

May 2, 2017
Most American owners are expected to opt for the hardtop version of the 58 Fly, with a retractable roof. Courtesy Absolute

The first thing that caught my eye on Absolute‘s 58 Fly was the expanded use of glass in her hull sides. Many of Absolute’s previous flybridge models had a pair of trapezoid-shaped hullside windows amidships and a second set of similar-size windows flanking the forepeak stateroom.

The 58 Fly has what look to be wider, quartz-crystal-shaped hullside windows, plus a ­second stretch of glass — looking like a knife blade with serrated edges — forward to within a few feet of the bow. I estimated it to be almost double the amount of glass I’d seen on those earlier models.

In addition, the glass in the yacht’s superstructure surrounding the salon ­extends from about side-deck height to the salon headliner. The result is a vessel with an aggressive appearance, an apparently lower profile and a sense of expanded interior volume, as opposed to a yacht that has more white fiberglass in her hull and superstructure.

Advertisement
The 58 Fly’s interior has a warm feeling. Creating that vibe is a galley with contrasting dark- and light-oak cabinetry, and with cream-tone Corian countertops. A walnut-bark sole in the galley and salon adds a neoteric touch, and ecru leather sofas are buttery soft. Courtesy Absolute
It seems like a simple thing, placing an electric cooktop catty-cornered to the yacht’s salon doors, but one of the benefits of this positioning is the saved floor space compared with a more traditional U-shaped setup. The layout also enhances the feeling of volume. Courtesy Absolute

That is not to say the 58 Fly lacks strength or backbone. Quite the opposite. I’ve tested a few Absolutes and have always found them to be stout out on the brine.

This yacht starts with a solid fiberglass hull form. Supporting that is the builder’s Integrated Structural System (ISS), which is a grid of longitudinal and transverse supports spanning the hull’s length and width. Soles, bulkheads and ceilings are fiberglass bonded to the ISS, creating a monocoque structure.

Power for the this flybridge cruiser comes from twin 600 hp Volvo Penta IPS800 diesels, offering a reported 26-knot cruise speed and a 32-knot top-end. With nearly 360-degree viewability, ­side-deck access from the helm and joystick driving capability, the 58 Fly should make close-quarter maneuvering and shorthand cruising a breeze.

For the growing cruising family, the Absolute 58 Fly has a three-stateroom, three-head layout. The master suite is full-beam with an en suite head and a queen-size berth. There is also room to add a washer/dryer here. The forepeak VIP has a double berth, facing diagonally from starboard to port, plus an en suite head. Abaft the VIP is a third stateroom with side-by-side bunks and an en suite head. Secondary access to the head is via a companionway door.

A crew berth is available via the transom, but most American owners are expected to use the space for stowage.

Italian style. Stout build. Admirable performance. Family-friendly. With the 58 Fly, it looks like Absolute has done its homework. All you have to do is step aboard and add water. 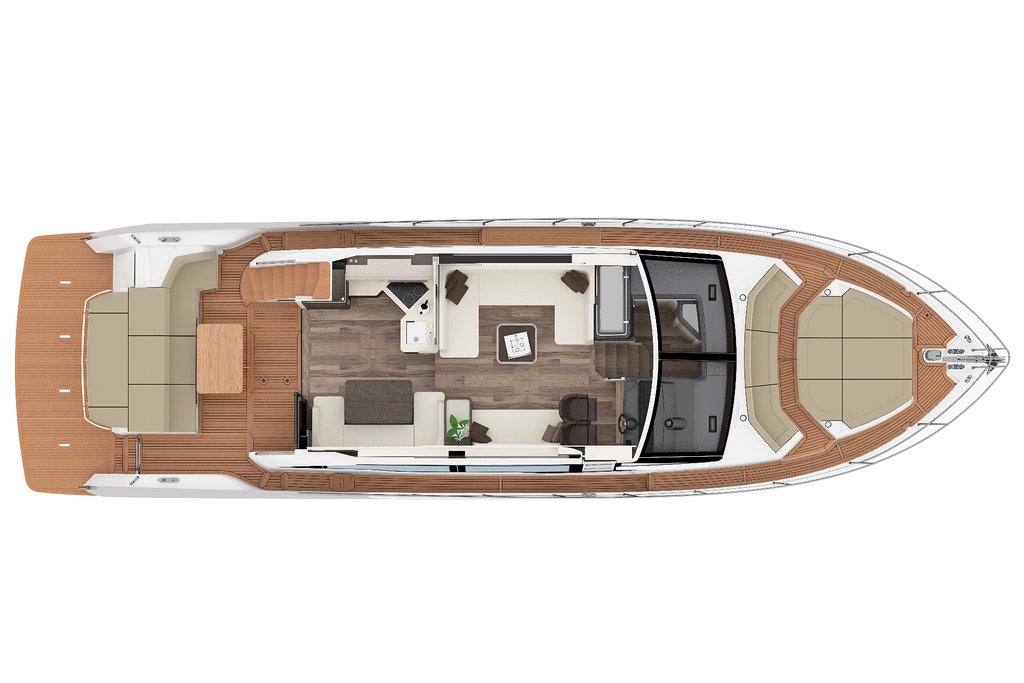 Man Versus Machine: Fishing with Technology

Man Versus Machine: Fishing with Technology