One of the world's largest sailing yachts just made history as being the largest megayacht ever to undergo a refit in New Zealand. Athena, the Royal Huisman launch coming in at 295 feet LOA (90 meters), wrapped up a nine-month stay at Orams Marine Services. 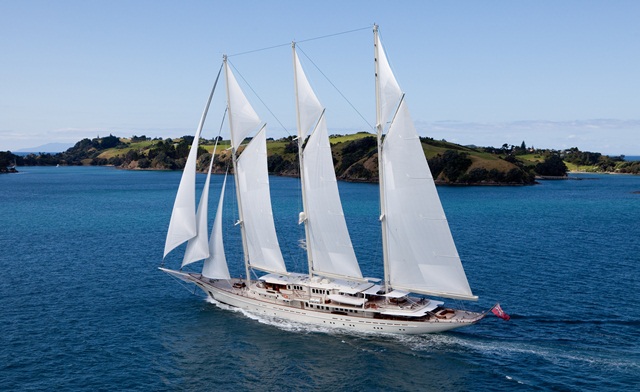 One of the world’s largest sailing yachts just made history as being the largest megayacht ever to undergo a refit in New Zealand. Athena, the Royal Huisman launch coming in at 295 feet LOA (90 meters), wrapped up a nine-month stay at Orams Marine Services.

If you’re not familiar with Auckland-based Orams Marine Services, it’s been refitting a variety of yachts since 1947. It’s also been part of Orams Marine Village, a purpose-built, full-service marine facility, in 2004. Orams Marine Services has refitted several well-known sailing yachts from Perini Navi and Alloy Yachts, in addition to high-profile motoryachts from Feadship, among other notable builders. Orams Marine Services landed the work for the three-masted, nearly eight-year-old Athena because of its relationship with the owner, having serviced two of his previous megayachts.

But because of Athena’_s size, the marina needed a refit itself. This included installation of new pontoons and the replacement of wooden piles with steel ones, filled with sand. Work was finished by the time _Athena arrived in February of last year. Still, though, she needed to remain in the water for a good deal of the work, due to her LOA. So, Orams Marine Services constructed a 315-foot-long (96-meter-long), climate-controlled, shrink-wrapped structure. No easy task, judging by the three weeks it took to create and the sheer amount of materials involved. Try these on for size: 600 wood planks measuring nearly 10 feet (3 meters) each, and 300 PVC pieces measuring nearly 20 feet (6 meters) each. Then there was 37,674 square feet (3,500 square meters) of shrink wrap, all of which was recycled upon _Athena’_s completion.

So what work was performed on Athena? Plenty. The hull and superstructure were repainted, as were the three 200-foot-tall (61-meter-tall) masts, which along with their rigging needed to be removed and then reinstalled. The masts alone required four cranes and 20 craftspeople to take off and then put back on Athena. Thankfully the 28,000 square feet (2,601 square meters) of sail area didn’t need replacing, though it did of course require removal, checks for repairs, and ultimately reinstallation, several days all together. All 55 winches were overhauled, too.

A good deal of varnish was reapplied aboard Athena, both outside and inside. Since only some exterior areas of varnish suffered sun damage, Orams Marine Services’ craftspeople needed to ensure the new gloss matched the remaining gloss. As for other tasks, suffice it to say that hardly a single piece of machinery or fixture went untouched, from the propellers to Athena’s fantastic figurehead.

6 Yachts to Keep an Eye On

6 Yachts to Keep an Eye On

Copyright © 2021 Yachting. A Bonnier Corporation Company. All rights reserved. Reproduction in whole or in part without permission is prohibited.