How to Best Plan and Execute Helm Upgrades

Where to start, how to plan and just how often yachtsmen need to upgrade their helms.

When it comes to national stereotypes, Seattle is usually painted as a mecca of coffee, rain, salmon and whip-smart techies who often spend free time boating on the region’s world-class cruising grounds. One such techie, a 51-year-old software executive, purchased a 2007 Nordhavn 55 in 2016, despite having owned nothing bigger than a bass boat when he was a kid. After three days of instruction on ­close-quarters maneuvering, he loaded up his family and cruised to ­Canada’s Desolation Sound. The multiweek itinerary was proof that modern electronics can make boating easier and safer for novices than ever before in marine history, but it also exposed shortcomings that required an electronics refit at Seattle’s Emerald Harbor Marine. There, the owner added three 19-inch Furuno touchscreen displays connected to two Furuno NavNet TZtouch black-box processors and a personal computer; a Furuno radar system; and a ­remote-monitoring and ­vessel-security system. While the owner did his homework and contributed ideas, a major key to success, he says, was working with an experienced shop. “They had veto power over everything,” he says, “but they exercised it gracefully.” While fiberglass, carbon fiber and stainless steel can last for decades or longer, engines, electronics and other onboard systems have considerably shorter life spans. Wear and tear, along with technology’s nonstop evolution, create inevitable obsolescence. That’s why electronics refits are a great way to breathe new life into older pedigree yachts while ­increasing on-the-water ­enjoyment.

The first step in any good refit is defining the project goals. For example, the Nordhavn 55 owner wanted remote ­vessel-monitoring and security capabilities, ­cutting-edge radar, the ability to navigate from the flybridge, and “a few fun toys” (read: the triumvirate of 19-inch touchscreen displays). However, he didn’t want to replace ­perfectly functional, albeit older, equipment. Defining these kinds of goals ensures that the project stays on track.

Task number two is finding and hiring the best shop or boatyard, which usually means one that has completed jobs of similar scale for yachts of comparable size and sophistication level.

“We recommend that owners interview two or three ­businesses that they think could do the job,” says Greg Allen, sales manager at Seattle’s S3 Maritime. “Ask around, and ask each business to give you three references.” Talking to other owners about their experience going through the refit process with a specific shop is often helpful. While you’re at it, ­Allen also recommends finding out which ­certifications each yard has.

Third, start a dialogue with the project manager. Have a budget and project scope, but keep an open mind toward ideas and suggestions from professionals who know what works. Smart service providers often physically inspect the vessel prior to creating a work list.

While there are pros and cons to technology’s bleeding edge, plenty of owners want to maximize their situational awareness and future-proof their helms. If this sounds familiar, the best time to peruse electronics commences with the Fort Lauderdale International Boat Show (early November) and concludes with the Miami International Boat Show (mid-February). A wise strategy is to use these shows to touch and explore the latest equipment prior to finalizing your purchase order. Also, it’s never a bad idea to see if your project manager will walk the show with you. He or she may be familiar with equipment that you might otherwise overlook.

“We’re happy to come and look at a boat,” says Scott ­Anderson, co-owner of ­Seattle’s CSR ­Marine. “We send out two sets of eyes, and we take a ton of photos.”

While it’s tempting to search online when pricing equipment, it’s critical to understand the shop or yard’s policy on installing, servicing and warranting ­owner-supplied equipment. “Focus on getting the system you want for a reasonable price,” says Nigel ­Barron, CSR Marine’s sales and marketing manager, adding that true pricing also includes proper installation and service. ­Allen agrees: “The cheapest package isn’t always the least expensive one.”

Along with budgets and project goals, delivery dates are an important detail. Most electronics refits can take about one to three months, which means work can be planned around a cruising schedule. Experts suggest starting refit discussions during the late summer and early fall to be cruising again by June 1, a schedule that dovetails with the industry’s tendency to introduce new products during the ­November-to-February boat-show season.

Before adding anything new, though, owners must decide how much older equipment can be salvaged. All marine-electronics manufacturers employ de facto walled product gardens (think Apple) for advanced-level features, meaning a Furuno multifunction display usually won’t work with a Simrad radar or a Garmin sonar. (While NMEA 2000 data backbones allow for some cross compatibility, this is typically for smaller items such as GPS antennas or anemometers, and not for core components.) Owners who want to salvage larger percentages of older gear could be forced to stay with that manufacturer, whereas owners who subscribe to the scorched-bridge policy will have more leeway. 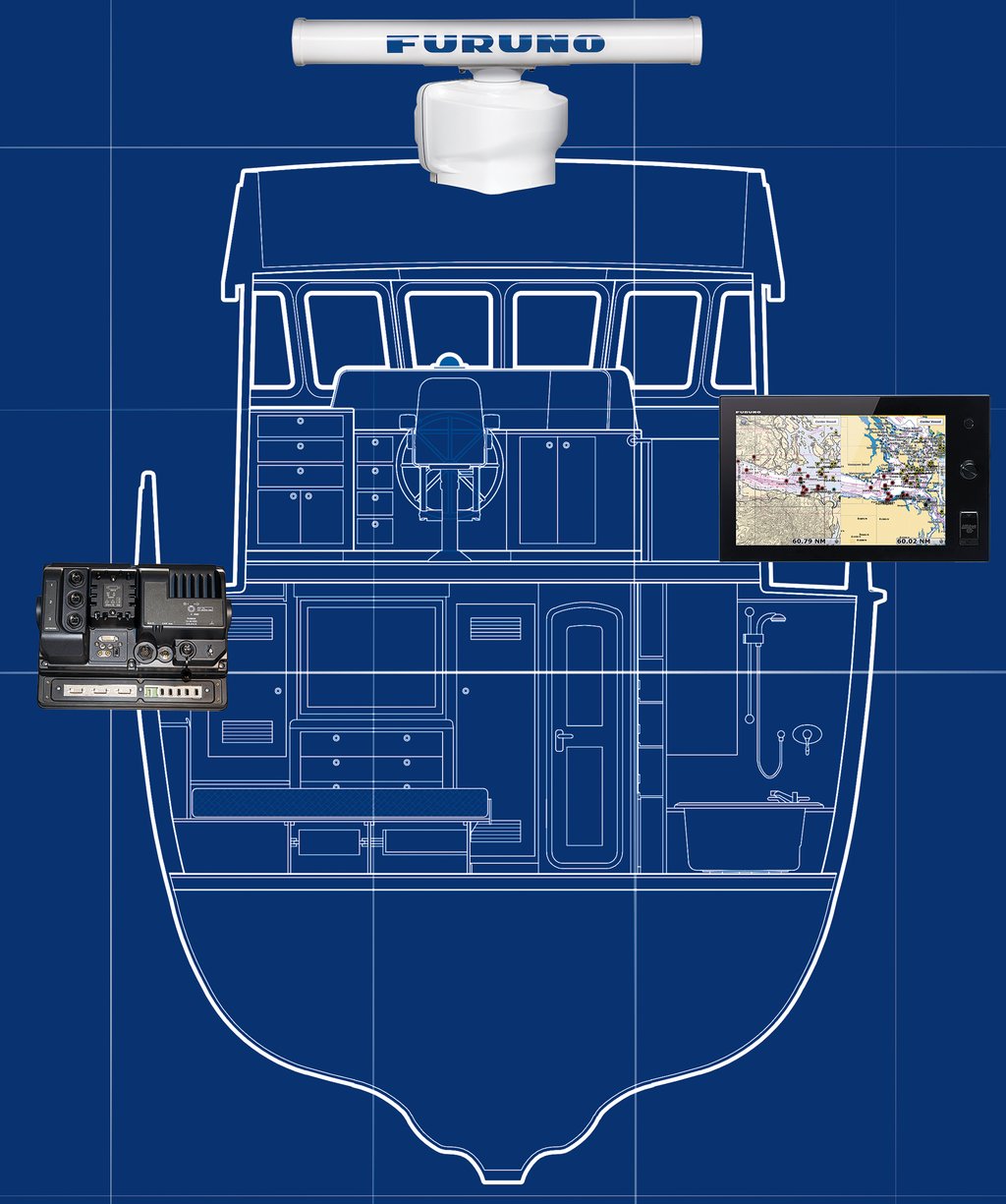 “MFDs are always A-1 because they’re the hub of the system, and you interact with and look at it,” McGowan says. “It’s the piece that most people start with, and they build their system around it.”

When choosing an MFD, owners are strongly advised to buy the biggest glass they can reasonably accommodate at their helm.

“No one’s eyes get better with age, and no one complains that they bought too big of a screen,” McGowan says.

While no one likes contemplating unforeseen electronics-related headaches, the reality is that gremlins occasionally creep into some systems, requiring yachtsmen to seek expert help. This isn’t a huge concern when you’re cruising on your home waters, where the same shop that performed the installation (or a shop that’s familiar with your vessel) can exorcise electronic demons, but what happens if you’re off cruising? In those situations, a wise move is to request that your refit shop supply you with a block diagram that details all installed equipment. While this won’t mean much to your guests, it will be of critical interest to visiting technicians.

One bit of good news is that hardware prices have been plummeting, allowing yachtsmen to realize greater electronics sophistication at their helms as long as they don’t resort to numerous change orders during a refit.

“From five years ago to now, the cost is almost half in some cases,” says Dave Dunn, Garmin’s director of sales and marketing for marine.

Overall sophistication of marine electronics has similarly surged. For example, most modern radars now use solid-state power amplifiers, rather than cavity magnetrons, to generate radar microwave pulses, which in turn allows manufacturers to harness Doppler processing. Another example is today’s fish finders, which use scanning technologies to provide real-time 3D renderings of the seafloor, structure and water column. Some even have forward-looking sonar. And thermal-imaging cameras, once the strict province of superyachts, are cost-competitive from FLIR and Iris Innovations. A handful of cameras can automatically identify and track potentially dangerous targets.

These technical advancements certainly increase situational awareness and user enjoyment, but they also have implications for future refits and brokerage-market expectations.

“Owners can stretch out from the three- to five-year refit cycle,” Thomas says. “Now, unless you’re a new-TV-every-couple-of-years personality, there’s no reason you can’t get seven to eight years [from a refit.]”

Then again, if you are a new-TV-every-couple-of-years personality, shelf life is getting shorter.

“Not because of quality,” Dunn says, “but because the industry is moving at an unprecedented rate. For customers who want the latest and greatest, it’s five years.”

Ultimately, refit decisions are personal, but the excellent news for yacht owners is that today’s dollars buy substantially more technology and ease of use than ever while adding fun new toys to the equation. With some homework and the right shop or boatyard, odds are excellent that owners will realize the same results as the Seattle-based owner of the electronically reborn Nordhavn 55. He is enjoying his new helm and contemplating his next adventure.

Staying Connected with KVH’s TracNet and ONE Hybrid Network